January 21, 2013
This is a half I will never forget!
(Except, I've been trying to post this blog for over a week, and I'm forgetting every day! haha!) 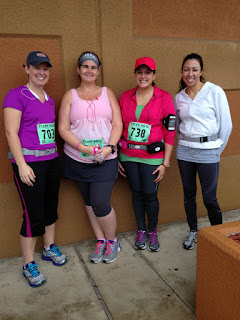 It was kind of my second half. My 2nd virtual half that is.
I knew I could complete the distance, and I hoped for a better time.
What made it a half I will never forget, though, is the the 3 mommas I shared the experience with!

We all got to spend over 6 hours without our kiddos, and having a blast!
This was the longest I had been away from Sophie (sad huh? lol) and while I did miss her, I enjoyed every second of girl time!
Thank you ladies for making this such a fun time for me! :)

It was an hour and a half drive there and we 4 girls talked and laughed like we had been friends for years! I was the only connection between all of us, but they all got to know each other quickly and gained new friends! :)

As for the half, I went in not expecting too much.
I wanted to beat my 3:36, but I didn't even really have a time goal in mind.
Once again, I wanted to just finish the distance.
I'm about 12 pounds lighter than last time, and I have been a running a lot more than I was last July! Plus it was 30 degrees cooler and overcast.
I had that going for me as well! :)

We were running in Rockwall, which is over an hour from where we lived and none of us had ever been there before. It was pretty interesting trying to figure out where we were going as we ran! Ha! I had a map, but I just didn't look at it enough beforehand! I know better now! :)

As we headed out, I quickly realized I would be the last one to finish. There were only 10 of us doing the half and the rest were doing 5K's and 10K's. The other moms doing the half took off and were much faster than me. I started getting discouraged right away. I hadn't even hit a mile and I was already thinking about quitting at the 10K.

I quickly voiced what I was thinking and my 3 motivators told me to just be quiet and that I was not quitting! We were in this together! :) 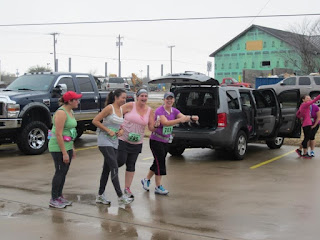 Heading out for the second half of the race...being silly! :)

The first 6 miles went by pretty fast. Mostly because all I kept thinking was, I need to use the potty!! haha! The course was an out and back twice, so we had to wait until the halfway point for a restroom break! I ate an entire package of Shock blocks within that first 6 miles. Not sure if it was because we got up so early or what, but I was just so tired! I used a 10oz handheld water bottle and it lasted me the whole 6 miles. I refilled at the halfway point. The second start out was tougher. We were all by ourselves and we actually missed one of our turns! We ended up by a prison and quickly realized we needed to turn around! We just knew we needed to get back on the "course" so we could still do 13.1 and not too much more! It started drizzling during this part, but it was welcomed! It was humid and warm, so it cooled us off a bit. Most of the streets we were running on were a steady incline. That was not a fun part of it. I really tried to keep my run 3/ walk 2 interval, but those inclines were definitely working against me. At mile 9, the lovely, amazing leader of the Rockwall chapter of Moms RUN This town, dropped off some water for us! So I drank my whole 10 oz in 3 miles this time and refilled then! 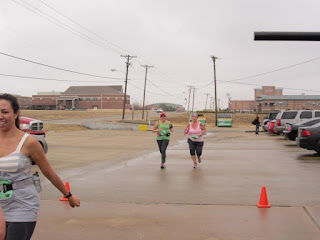 Coming in to the finish! :)

I ate another package of shot blocks for the last 6 miles and I'm not sure if it was enough. I was still dragging! I'm thinking I need at least one more package of shot blocks, or maybe just one more supplement of a different kind. I'm also hoping to get my iFitness belt to work, so I can bring some NUUN to my next half. Seriously love that stuff! 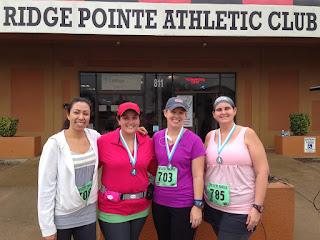 With lots of talking, walking, and jogging. We finally made it to 13.1 and our finish line! I pushed at the end when I really didn't think I had much more in me! I finished in 3:20, which was a new PR with 16 min. shaved off! :) I was proud to complete the distance again and so happy that I was able to do it with those 3 awesome momma's!! They were so great to stick with me and really push me! I felt discouraged because I was "last", but they kept reminding me that at least I was out there doing it! So true! :) 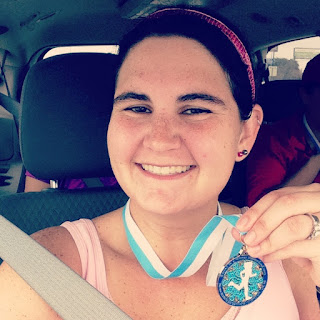 I now get to add another medal to my growing collection! 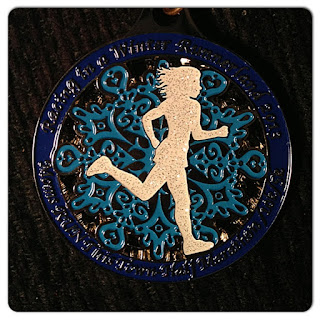 I learned a few things during this race. One...Injiji toe socks are A-Maz-ing. No blisters and no lost toenails!!! Two...I have HORRIBLE posture! One of the main things that hurt on me were my shoulders! I slump over way to much when I'm tired! :( Three...Pro Compression socks Rock! My calves felt pretty great after staying in them the rest of the day! And Four...I can run 13.1 miles! I'm still pretty amazed at that part! I can actually do it! :)

After the race we drove an hour to a burger place called Toms Burgers.

It looks like an old diner! It's so cute! The burgers are so good!

Fun Fact: This was my meal of choice after I had Sophie!
It was right down the street and I was craving one of their Bacon Cheeseburgers and their pancake breakfast, which is also delicious! :)

We all waddled our way back to the car afterwards.
Partly, because we were full, and partly because we all couldn't move! :)

It was a great experience and I'm so glad I didn't quit at the 10K like my mind wanted too!

Now onto training for the Cowtown Half on February 24th!
I must be crazy! :)

This is what PRO Compression has to say about how they work:
"PRO Compression socks are designed specifically to deliver both maximum comfort and speedy recovery times. The science is complex, but benefits such as improved blood flow, stability and comfort are universally understood.  The moment you put these socks on your feet and incorporate them into your game, you will feel and understand the difference."
I have 4 pairs of PRO Compression Marathon socks and I LOVE them! They have been wonderful for recovery after my last two halfs and after my long training runs!
I didn't own any after my first half, and it took me almost 2 weeks until I could …
49 comments
Read more

April 13, 2013
One of the reasons I haven't been blogging much is because we just bought our very first house!!! Isn't it beautiful!
We don't move in until next week, but buying a house has taken a lot of time! I've been packing our apartment up a little at a time, but we still have A LOT to do!
It's hard to move with a toddler, because you don't want to shake their world up too much. They need their usual toys and to be able to find their favorite shoes amongst the boxes. Taking it slow and moving a little at a time just seemed like the best option.
We are going from a 2 bedroom apartment to a 4 bedroom home!  With a backyard! Down the street from a park! We are going to have so much space!  Being able to go outside in the back and down the street to the park is a huge deal for me!  Sophie and I LOVE being outside! I am so excited! I just can't even describe it! lol :)
And that's not all of the big news!
I also got a job!
It is an office job, where I will be doing t…
10 comments
Read more

October 03, 2012
I just wanted to share some of my favorite Running gear right now! :)
I'll start with the one thing that everyone knows I already love...
My BOBRevolution SE!
I've been using it for a a few weeks now and I'm still in Love! I'm not sure how I've lived without it these past 15 months! You can read my BOB "review" here! :)

My newest favorite thing are my hotpink Locklaces!

They are elastic shoelaces that  tighten by a "lock". They make it easy for me to just slip my shoe on and go! They are also wonderful because I have had issues with my shoelaces being too tight on the top of my foot and these fix that problem! No more pain! I wish I had known about these forever ago! I will have them on all of my future running shoes!
I love their moto!
Now onto something that I think every single person who is active outside should own. Pepper Spray.
In this case the Personal Saver and the Wrist Saver.
This i the Personal Saver I carry it on my keychain everyw…
10 comments
Read more