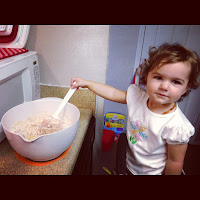 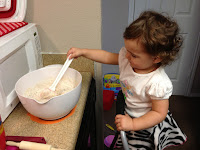 Helping mommy make Pumpkin Bread!!!
This makes my heart so incredibly happy!
I absolutely LOVE holiday baking and she had n absolute blast "stirring" the dough!
She was whiny when I had to take it away to actually finish stirring and cook it! I turned the oven light on and she would occasionally run into the kitchen to "check" on it! It was so adorable!

I also made 2 pumpkin pies and Apple Crumble! Yummy!
The 1st Pumpkin pie was actually a mistake though! I used Sweetened Condensed Milk instead of Evaporated milk! I quickly googles how it was going to turn out and people said it was basically going to taste like a pile of Sugar! I rushed out a bought more ingredients so I could make a real one the right way as well! I baked both pies. The verdict from me was the mess up tasted way too much like milk and not enough like pumpkin. I sent it home with my brother who liked it and he let others try it and they all liked it! HaHa! I guess I should mess up more often! :)

The real Pumpkin pie was oh so yummy as well!
My Apple Crumble Pie didn't set well and was a bit runny, but still tasted good! :)

Now onto the race recap!

I got up early and snuck out of the house while Sophie and my hubby were still sleeping soundly! 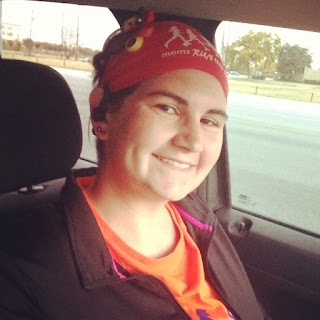 I wanted to be a bit festive and wore Sophie's turkey bow clipped on my MRTT Bondi Band!
I also wore my Orange MRTT shirt under my jacket! :)

I got there way to early because I was worried about parking! The race didn't start until 8, but they had a half marathon start at 7:30, so I knew it would be crowded around this area of the park! I ended up getting a GREAT parking spot and just sat in my car for a while until closer to time!
I met up with my friend and her family close to 8 at the start!
We had said we wanted to stick together and finish this together. She is faster than me (especially since neither of us were pushing our children this time!) and she said she would help push me!
We started out slow and easy. That's the biggest mistake I make! I start out fast because I'm so excited and after the first mile, I'm exhausted and have to take a walk break. Well I said, slow and steady wins the race (HA) and we were off! After we ran the first mile and still felt great, we decided we could do this! We could run this whole thing WITHOUT stopping to walk!

She continued to encourage and push me and we kept going! She, like myself, have never ran a 5K race without stopping to walk! I've done it during a regular run, but not a race! After every half mile, we congratulated each other for running this long with ou stopping! lol We had to keep each other entertained and motivated some how! :)

When we were less than .25 miles from the end, I looked up and saw a hill! I was like, what the heck?! Right at the end? That's just torture! We both said we wanted to finish strong and run as fast as we could at the end, but I wasn't sure I could do it after that hill!

We climbed the hill and she wanted to take off! I told her go ahead, but she wouldn't leave me! We were sooo close to the finish line! I then said ok lets go! We both took off running as fast as we could (after being so tired) and we both finished strong! I was so proud of us! We did it! We ran our first 5K together and without stopping for a walk break!!! 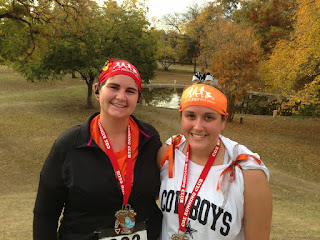 Me and my BRF (Best Running Friend) afterwards with our medals!! 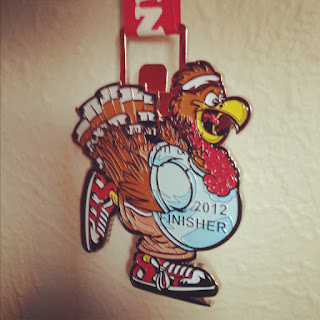 And this is the awesome Turkey medal we received! It's huge and heavy! I LOVE it! I definitely feel like I earned this one!!! :)

After the race, I went home to start cooking the turkey!! We hosted Thanksgiving for 2 close friends and my brother! The turkey was done about 1ish and we had a lovely meal! :) Sophie's 1st Thanksgiving to actually eat Turkey! Last year she wasn't old enough! She loved the turkey, my friend Jackie's DELICIOUS stuffing, pumpkin bread, and of course pumpkin pie! :) She tried other stuff, but those were her favorites! 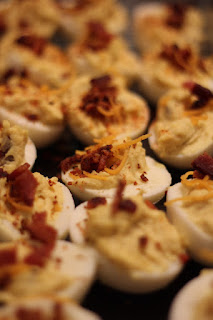 Yes that is crushed up bacon sprinkled on top of deviled eggs!
OMG they were good! My brother made them and he even added some Saki to a few! I didn't try those, but the others that did said it was delicious! :)

After stuffing ou faces, the boys headed out to toss a football around!
Sophie wanted to join in of course! :) 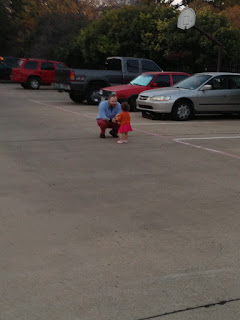 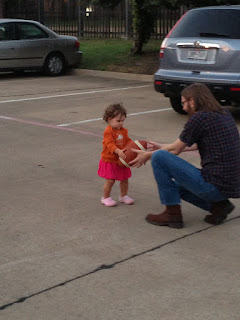 Our friend Brad being handed the ball after Sophie brought it from her daddy to him! :) 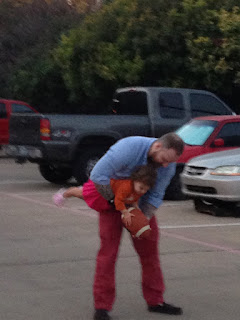 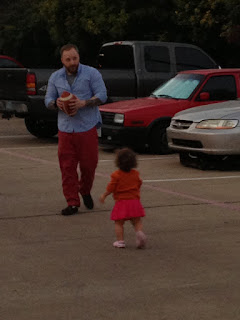 It was such a fun day!
I'm glad I had my brother and friends to help celebrate! :)

I hope everyone had a great Thanksgiving!!! :)
Do you have any special traditions for Thanksgiving?
We are trying to start our own, but we don't have much yet!